Troldhaugen was the home of Edvard Grieg and his wife Nina.

The Villa was built in 1885, and the couple lived there the last 22 summers of Edvard Grieg’s life. Troldhaugen became a museum in 1928 and includes Grieg’s Villa, the composer’s hut and the Grieg couple’s gravesite as well as a modern museum building and the concert hall Troldsalen, a chamber music hall seating 200 people. Troldsalen is the centre of the museum’s extensive concert activities and has excellent acoustics.

Edvard Grieg referred to the Villa as his “best opus so far”. The ground floor of the house is open to the public and consists of a Memory Room filled with objects from key events in Grieg’s life, the original spacious dining room, a veranda and a sitting room where you can explore Grieg’s very own Steinway piano from 1892. The instrument is still playable and is often used for concerts, sometimes even recordings.

The richly ornamented veranda was turned into an enclosed winter garden in 1906 and a stained glass window could then be inserted just above the balcony door. The red rose ornament adds a poetic touch to the villa, which in its idiosyncratic way expresses the taste and spirit of Nina and Edvard Grieg.

In the house, constant visitors and noise from the kitchen interrupted the absolute quiet Grieg needed in order to work. This is why he in 1891 had the composer’s hut built down by the lake, so he could be alone with his musical ideas.

Grieg used his composer’s hut frequently when he stayed at Troldhaugen. He went down every day, locked himself in and tried his best to work. It wasn’t always easy for a composer who was easily distracted. An unfamiliar sound or a boat rowing on the lake was enough to break his concentration. When he left the hut at the end of his working day, or when he was gone from Troldhaugen, he always left a brief hand-written note on his writing desk:

"If anyone should break in here, please leave the musical scores, since they have no value to anyone except Edvard Grieg”

The sunken building is so well-adapted to the terrain that it is almost invisible to visitors who cross the little bridge to Troldhaugen. An ingenious touch was to add a turf roof, which not only makes Troldsalen blend wonderfully with the surrounding vegetation, but which also forms a poignant link between traditional and modern building techniques. The floor-to-ceiling windows behind the stage provide the audience with a lovely view of the composer's hut and Lake Nordås.

By the entrance we find Ingebrigt Vik's bronze statue of Edvard Grieg from 1917, a copy of which also stands in Bergen’s central park. This sculpture is life size – like Grieg himself its height is 1.52 m.

Nina and Edvard Grieg's tomb is located in the mountainside facing the lake. One evening when Edvard Grieg and his best friend Frants Beyer were out fishing on the lake, the last rays of the sunset hit that spot of rock. "There I would like to rest forever" said Grieg.

After Grieg’s death, his cousin and architect, Schak Bull, designed the tomb. It is simple, yet poignant, with Grieg's name chiselled in runes. 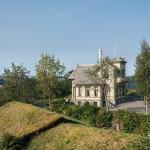 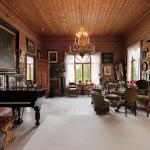 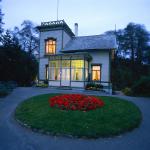 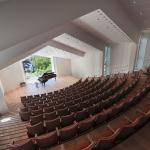 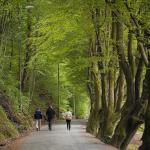 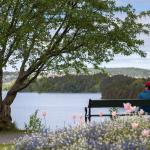